You are here: Home » FidoNet » YouView from Fido

Last month saw the launch of the new YouView box by Humax.

Described by Lord Sugar as “a great moment in British television”. CEO Richard Halton added “YouView is easy to use and seamlessly combines the worlds of catch up and live TV, on the living room TV.”

The easy-to-use set top box is set to transform how UK viewers consume TV.  You can take advantage of more than 100 digital TV and radio channels, seven day catch-up and on demand programmes from the content libraries of the BBC, ITV, Channel 4 and Channel 5 – all delivered to the viewer’s main TV.

YouView features an innovative electronic programme guide (EPG) that allows users to scroll back seven days to catch-up on programmes they’ve missed.  You can watch in HD and record, pause and rewind live TV.  Easy-to-use search lets you find on-demand content by programme or even actor’s name.

Backed by some of Britain’s biggest names in TV and broadband – the BBC, ITV, Channel 4, Channel 5, Arqiva, BT and TalkTalk – YouView brings a fully integrated service to homes across the country via a broadband internet connection, television aerial and a YouView set top box.
YouView will be available in two ways; from retailers, with no further TV subscription, or from an ISP as part of a phone and broadband package. Retail partners already signed up include John Lewis, Currys, Comet, Argos, Amazon, Richer Sounds and the Euronics group.  BT and TalkTalk will announce their packages soon and from launch they will offer additional content and services to customers accessing YouView via their broadband networks. YouView is also available from Fido for a one time fee from today.

The YouView proposition will constantly evolve and following expressions of interest from over 300 potential content partners, YouView will soon have a range of quality content available from content partners including Sky’s Now TV and STV. A formal enrolment process for content partners was also launched today. 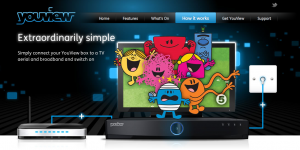 Lord Sugar, Chairman of YouView states: “It’s with great pleasure that we announce that YouView will be available from major retailers later this month. Our intention with this simple–to-use box is to provide extraordinary TV for everyone, with on-demand services combined with TV channels with an opportunity to search back an entire week to catch what they’ve missed.  It’s a whole new way of experiencing TV.”

Richard Halton, CEO of YouView adds, “Today, YouView is being enjoyed in over 2,000 homes and the feedback from the trial is very encouraging.  It confirms that YouView is easy to set up and use and different to what has gone before. In many ways we’ve only just begun, YouView is set to evolve quickly and we look forward to working with new content partners and developing more functionality as boxes roll out into UK homes.”

Fido.Net’s team of experienced engineers and management have been working in the internet industry since its inception in the UK back in 1992. Jon Morby, the founder and owner of Fido.Net originally started in IT as far back as 1982, and was one of the UK (and Europe’s) main importers of both email and echomail for the fidonet network of amateur bulletin boards, running the fidonet.org Internet gateway from 1985 through to 1994. Jon Morby - founder of Fido.Net. Although enjoying a successful career in Stock Broking working out of the Birmingham Stock Exchange, Jon felt the real future was in the Internet; and after some persuasion by Demon’s then Managing Director Cliff Stanford, Jon joined Demon Internet Ltd, initially responsible for their Birmingham Point of Presence (PoP) from 1993 to 1995 and then moving to London to supervise Demon’s growing technical support team. By the time Jon finally left Demon in January 2000 he was their Advanced Technologies Manager responsible for managing the development and implementation of the next generation systems which Scottish Telecom (now Thus PLC) and Demon would be rolling out over the next 3-5 years – a far cry from his original days running a support desk of 5 staff! Fido.Net’s senior staff have had a grounding in the Internet with the majority of them having worked for ISP’s such as Demon Internet, EasyNet and other main stream UK Service Providers, as well as some of the first large Internet Portals (including online trading experts The Interactive Investor, and the not so successful boo.com).

This site uses Akismet to reduce spam. Learn how your comment data is processed.